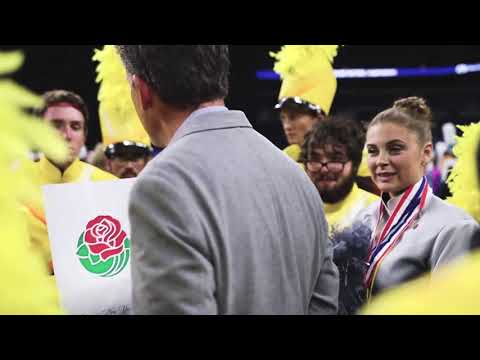 KINGSPORT — Northeast Tennessee, and specifically Kingsport, will have multiple parade marchers on the West Coast to mark the new year.

The Salvation Army of Kingsport, Sullivan South High School and East Tennessee State University will have a representative in the Tournament of Roses Parade, the same parade in which the Dobyns-Bennett High School marching band will march down Colorado Boulevard. The event will be broadcast on multiple networks and run from 11 a.m. to 3 p.m. Eastern standard time Wednesday, Jan. 1.

Emma Brewster of the Kingsport area has been selected as one of 50 musicians from the United States, Canada and Mexico to represent the Salvation Army in the New Year’s tradition. This marks the group’s 100th appearance in the parade, with the first dating back to 1920.

WHO IS EMMA BREWSTER?

Brewster is very familiar with the not-for-profit group since her mother and stepfather, Jayne and Joe May, are majors in the Salvation Army of Kingsport.

The recent graduate of Sullivan South, chosen from among thousands of applicants, just finished her first semester at East Tennessee State University, where she is seeking a degree and teacher certification in elementary education.

She began her musical training as a Salvation Army bandsman at the age of 12 and has developed as a musician in public school music programs, including marching with Sullivan South’s Rebel Marching Band. She plays baritone in her Salvation Army Corps (church) Band and Salvation Army Divisional Youth Band.

“I feel super honored and proud to be even considered for this event. I’ve been watching the Salvation Army Band in the parade since as long as I can remember, so to even be associated with that same group is mind-blowing,” Brewster said, adding that she is looking forward to getting to know other fellow Salvationist musicians from around the country.

“I hope to leave with a better understanding of exactly what I’m a part of and how much it impacts people not only locally but nationally, as well. I also hope to make new friends and fun memories to last me a lifetime.”

She will depart for California from Nashville on Dec. 28. The Salvation Army pays for the air fare, but Brewster had to raise $600 to cover her expenses, including meals, lodging and a trip to Disney World before the Jan. 1 parade.

WHY DOES THE SALVATION ARMY MARCH IN THE PARADE?

Group Bandmaster Kevin Larsson said the parade is a huge ministry opportunity for the Salvation Army.

“That’s why we keep on investing into it,” Larsson said. “We’re playing ‘Amazing Grace’ or ‘Stand up for Jesus’ and often the name of the song is displayed on TV. So we can reach millions, millions and millions with that ministry.”

Recently retired CEO of the Pasadena Tournament of Roses Association Bill Flinn, also bandmaster at the Pasadena Tabernacle Corps, said that in a single block, the Salvation Army band can pass up to 25,000 people and that millions around the world tune in to watch the parade.

The Salvation Army band has continuously participated in the parade longer than any other band. It morphed from the small Pasadena Tabernacle Corps band that first appeared in 1920 into today’s group that includes individuals from around the world.

“It’s still a thrill when you are marching down Colorado Boulevard with the million or so people, and they kind of sing along as well,” Larsson said. “People certainly love the Salvation Army and they make that known as we’re marching down.”

WHAT IS THE SALVATION ARMY?

The Salvation Army is a global Christian movement founded in 1865 by William Booth. It has become one of the major nonprofit social service organizations in the world. In the United States this year, the group has provided more than 52 million meals, more than 9 million nights of shelter and served more than 23 million men, women, and children with services that range from after-school programs, senior services, and veteran job placement to drug and alcohol treatment.

An evangelical part of the universal Christian Church established in 1865, it  has been supporting those in need in Christ’s name without discrimination for 130 years in the United States. Nearly 30 million Americans receive assistance from it each year through a broad array of social services that range from providing food for the hungry, relief for disaster victims, assistance for the disabled, outreach to the elderly and ill, clothing and shelter to the homeless and opportunities for underprivileged children. Eighty-two cents of every dollar spent is used to carry out those services in 7,000 communities nationwide. For more information, go online to www.salvationarmyusa.org.