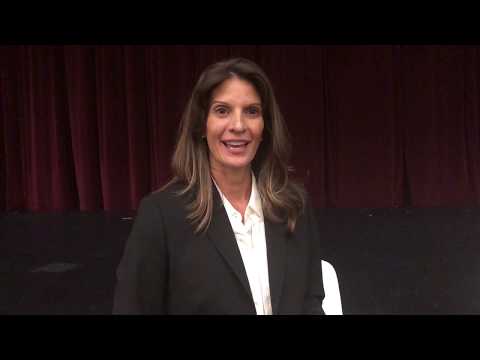 BLOUNTVILLE — It was a homecoming of sorts Wednesday afternoon for Bethany Flora, one of two finalists to become the next president of Northeast State Community College.

The East Tennessee State University employee once worked at NSCC and grew up on a dairy farm in Meadowview, Va., in Washington County. However, if chosen for the position, she would be moving from helping prepare others to become community college leaders and potential presidents to becoming a president herself.

Flora, associate director of the Center for Community College Leadership at ETSU, and Joel Welch, vice president of Instructional Services for Forsyth Technical Community College in Winston-Salem, N.C., are the finalists announced Oct. 10 by the Tennessee Board of Regents.

Flora and Welcone were the two finalists announced last week as the consensus of the Search Advisory Committee.

Flora visited NSCC’s main campus in Blountville and the satellite campus in Kingsport Wednesday, meeting with various constituencies of the college, while Welch is to do the same Thursday. His public forum session will be from 10:30 to 11:30 a.m. As was Flora’s session Wednesday, the Thursday forum will be open to faculty, staff, students and the public.

The location for both is the auditorium of the Regional Center for Performing Arts on NSCC’s main campus, with live-streaming online archived at tbr.edu/hr/executivesearches/president-northeast-state-community-college. Details of her and Welch’s background can also be found there.

Flora got her bachelor’s degree from the University of Virginia’s College at Wise, her master’s from Tusculum University and her Ph.D. from Virginia Polytechnic Institute and State University. She has worked in her current position since 2016 and also has been an associate professor of postsecondary and private sector leadership since 2011. She also served as assistant provost for Virginia Tech in Blacksburg, director of graduate recruitment and retention at Radford University and site facilitator of the Workforce Investment Act Grant at NSCC.

She or Welch is to replace interim President James King, who took over in mid-2017 after Janice Gilliam retired after a faculty vote of no confidence and a TBR investigation of allegations of financial problems and a “climate of fear.”

“Culture and climate and morale is not up to one person. It is up to all of us,” Flora said.

During the hour-long forum, Flora said:

— NSCC, along with Ballad Health and ETSU, should spearhead regionalism efforts to increase the area’s economic footprint.

— Her work at ETSU, Virginia Tech and being a mom to two children are three crucial experiences that would help her become a good president. Her daughter is a second-year NSCC student and her son is a community college student in North Carolina. Both plan to transfer to four-year schools.

— Her leadership style is not a micro-manager, she uses data and does not want “yes” employees, but those who will enter into honest dialogue. “I have high expectations of myself and others,” she said, adding that it is time to “move on from mistakes” of the past. “We need to move into the future. That’s my style.” she said. “I’m big about taking informed risks.”

— A lack of fundraising experience is her biggest weakness, but she said she worked on medical school and arts programs in past jobs. Although never the one to “make the ask,” she said she will depend on those with more experience and is willing to learn.

— She opposes the idea of outsourcing jobs at NSCC, agreeing with King, because she said it would have no significant dollar savings and hurt long-time employees who opponents say would lose jobs or if rehired be paid less with fewer or no benefits.

— She supports having a new salary study for adjunct as well as full-time faculty. One adjunct faculty member said she got $350 per month per course and the last salary survey and study were in 2013. Former Faculty Senate President Francis Canedo, now dean of humanities, said it has been 20 years since adjunct faculty pay was evaluated and that adjunct faculty get about $1,600 per class per semester. “I think some of the best teaching and learning happens at community colleges,” Flora said.

— She would form a Student Advisory Council including veterans, older students, working students and those 18-21.

— As a teacher in Nashville for the Center for Community College Leadership, she said there are many more similarities with college and career readiness than differences. “I think the divide is overexaggerated,” she said.

— Campus safety requires resources, a community willingness to express concern about protecting campus while not impeding on student freedoms and following state law and policies. Asked about the elimination of student parking passes this school year, she said; “I don’t want to live in a police state” and that she has no problem with a campus being “open to the public ... campus and not know if they are a student or not.”

— She would “certainly study” expanding NSCC’s presence in Carter County. Current satellite campuses are in Elizabethon and Johnson city, as well as the Academic Village in downtown Kingsport she toured earlier in the day. She said satellite campuses are crucial to serving adult learners, which she said the college must attract as the number of high school graduates in the region dwindles. She also said the Regional Center for Advanced Manufacturing has some Ph.D.s taking hands-on machining classes.

— Introducing sports teams at NSCC would be an idea worth considering, she said, adding that she also avidly supports the arts and music programs at the school, including the plays performed where the forum was held. She said athletics and arts can engage students and improve student retention and academic performance.

— She would like to borrow the idea of the Abingdon College of Older Adults at the Kingsport Center for Higher Education. She said those 50 or older could pay $50 a semester to take non-credit courses taught by volunteer instructors.

— More articulation agreements with TCATs (Technical Colleges of Applied Technology) are needed like the recent one with the TCAT in Morristown to bring “clock hours to credit hour transfers.”

— As the face of NSCC, an honor and responsibility, Flora said she would have integrity and a moral compass and can work with what the questioner called “good old boys.” She was the face of Radford University at the Higher Education Center in Abingdon and said the NSCC job is a long way from “running through cowpiles barefoot” on the dairy farm. She said working in the male-dominated manufacturing industry and as a resident assistant in an athletic dorm at the school that became the University of Virginia at Wise, taught her to work with all. “I’ll sit at the table with whoever they are and be part of the team.”

— To prioritize things, Flora said she will “listen first” and have a “laser focus” on students, as well as work to improve institutional health, campus climate, develop strategies and build enrollment. She said bringing more K-12 students to campus with summer camps and an art institute would bring early access and awareness, highlighting faculty to attract students, community support and ultimately jobs. She also said she would enhance relationships with K-12 education officials.