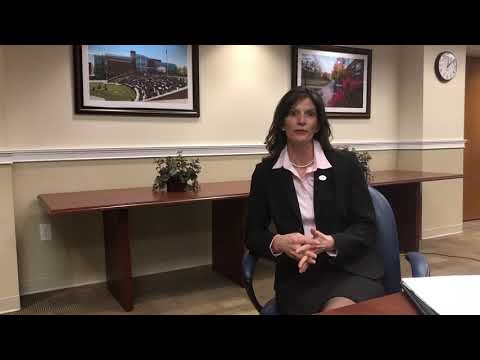 She’s “listening, learning and assessing” and talking about “three buckets” of focusing on student success, excellence in programs and services and continuing the college’s improved organizational and financial health.

Flora sat down for a one-on-one interview with the Kingsport Times News Wednesday and shared her thoughts since she formally began her presidential duties on Jan. 2. She focused on the Jan. 7 convocation that she said for the first time in 19 years brought together almost all the 400 or so faculty and staff in one place at one time, except for the guy who does the mail. He was unavailable, awaiting a shipment, but she also met him that day.

WHAT IS HER FIRST-YEAR FOCUS?

“Listening, learning and assessing. That’s my mantra the first year,” Flora said. “The campus (at convocation) was so positive and motivated.”

Front and center Jan. 7 was a data summit for Achieving the Dream, a national nonprofit program partnership with the Lumina Foundation and others that focuses on helping students meet their dreams and goals. The event put mixed groups of faculty and staff into teams during break-out sessions to look at data showing student success. She said NSCC has about 150 student success programs and it is important to measure their effectiveness.

It is to find what’s working, Flora said, and to pinpoint where more can be done. She also said she’s working to get to know everybody but she remembered some from working at NSCC 19 years ago.

She said student success, excellence in programs and services, including a pending reaccreditation by the Southern Association of Colleges and Schools, and organizational health are important.

“We’re on solid financial footing. The ship has been turned,” she said, adding that she will be financially conservative and fiscally sound. She also said she looks forward to the projected spring of 2020 opening of the new Technical Education Complex, the largest community college capital project in the state’s history.

WAS HER GOAL EVER TO BE A COLLEGE PRESIDENT?

“I used to tell students anyone who would tell me they wanted to be a college president, I was concerned about,” Flora said.

“I’ve always known I was suited for higher education,” she said. “I’m thrilled to be a college president.”

However, she said higher education leaders generally have a natural progression to become administrators, which is rewarding but carries lots of responsibilities.

Flora said East Tennessee State University “will always have a special spot in my heart” since she worked there from 2011 until the end of 2018, helping train and educate future college administrators. She was the morning ETSU commencement speaker in December.

WHAT DOES SHE THINK OF KING AND MCCORD?

Flora said she spent about an hour on the phone Tuesday talking with former interim President James King, who is staying on to help with the transition until Jan. 31 and maintaining an office in Kingsport. Since mid-2017, he presided over a $5 million “right-sizing” of the school’s budget after the departure of retired President Janice Gilliam, who got a no-confidence vote from the Faculty Senate in early 2017.

“President King has been remarkable,” Flora said. “He feels like a brother to me.”

She also lauded the work of outgoing Vice President for Workforce and Economic Development Jeff McCord, who is leaving Jan. 17 to become commissioner of economic and workforce development in the administration of new Gov. Bill Lee. She said a transition plan for McCord’s position will be announced soon.

WHAT’S HER MESSAGE TO STUDENTS?

Flora said that when about 4,734 students (enrollment as of Wednesday) return Jan. 14, her message to them will be similar to the one she gave staff and faculty Jan. 7.

“You belong here. Your voice matters, and your skills and talents are what make this place a great place to work and learn,” she said, adding that students Zack Keith and Samatha Parrish addressed the convocation with their personal stories and reinforced her goal to “create an environment where everyone feels like they can belong and be successful.”

Keith had a roundabout path to his pending graduation, and Parrish is an Achieving the Dream Scholar who will go to California later this year for a national event.