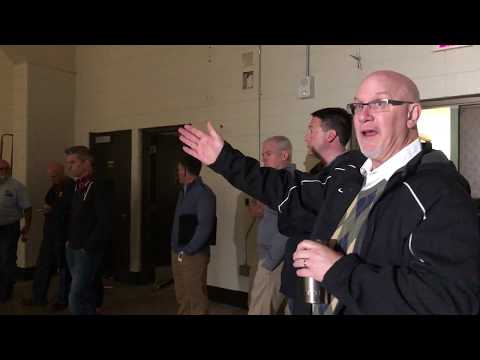 KINGSPORT — If you keep up with news about Sullivan County’s new West Ridge High School, you’ve read about some people being upset it won’t have a pool when it opens in August of 2021. West Ridge instead will use the pool at nearby Sullivan Central, which will become a middle school.

But have you heard that Kingsport’s new location for Sevier Middle School come August of 2022, the current Sullivan North High, has an inoperative pool that may not be worth fixing? Instead, a city school official said the likely plan is to floor over the pool or possibly fill it in with gravel. The space then would be used  for school or community recreation as a gym.

WHAT’S THE DEAL WITH THE NORTH POOL?

During a tour of the Sullivan North High/Middle campus Monday morning, Kingsport Superintendent of Schools Jeff Moorhouse told members of the Board of Education (BOE) and Board of Mayor and Aldermen (BMA) that the old North pool likely isn’t worth fixing, based on information passed along by Sullivan County maintenance folks.

The city has already purchased North for $20 million, using part of its proceeds from a countywide capital bond referendum that also funded the new Regional Center for Science and Technology at Dobyns-Bennett High School; Sullivan County’s new West Ridge High and Sullivan East Middle, the latter to open for students Jan. 8; the new Vance Middle School in Bristol, Tenn.; and a few improvements at Johnson City’s Liberty Bell Middle.

The rough estimate from Sullivan County maintenance personnel had been that rehabilitating the pool, which dates to the opening of the structure in the fall of 1980, would cost at least $1 million. The estimated cost of building a new pool and building from scratch for West Ridge is about $5 million.

At the behest of Vice Mayor Colette George, and after temporarily being locked out of the pool area that is normally off-limits to students, faculty and staff at North, the BOE and BMA morning tour took the group to the pool next to the basketball gym. The area is no longer heated and cooled, and the mostly dry pool is in disarray, with an old fire extinguisher and lifeguard platform at the bottom of the deep end that is more than 15 feet below floor level.

The only water at the bottom of the pool was in a pit about one foot square, where a sump pump operates continually to remove water that accumulates there. City Manager Chris McCartt said commercial grade pools that deep generally have some sort of natural ground water emerge under them when there is otherwise no water in the pool. He estimated the pool has been closed for about 15 years.

Moorhouse told the group that county maintenance folks indicated they had checked and the pool likely wasn’t worth repairing, but George said she would like to see a more recent and formal estimate of what getting the pool back in operation might cost.

POSSIBLE USES FOR THE SITE

Others attending Monday’s 90-minute tour included school board members Jim Welch and Todd Golden, Mayor Pat Shull, and Aldermen James Phillips and Tommy Olterman. Moorehouse said Christmas plans and job issues kept other officials from attending but that the Monday tour date, when school was not in session, worked best for the largest number of officials asked to tour the facility.

Moorhouse told those on the tour, also including city and school system staff members and reporters, that the city’s Parks and Recreation Department might have a use for a new facility built where the pool is, since it could have an outside entrance separate from the rest of the building. In addition, he said the school system’s bus shop might relocate from Industry Drive to a career technical education area of North with two large garage doors.

He emphasized the building offers opportunities and space sorely needed for the school system. He said the current Sevier is a bit underutilized at about 780 students but Robinson Middle is bursting at the seams at 1,020 students. He said the plan is to rezone the feeder elementary schools so that both schools have about 1,000 each.

Answering a question from Olterman, Moorhouse said the new school, originally designed for about 1,600 high schoolers in 1980, could allow the school system to handle any additional city-zoned students who are attending county school but wish to transfer to the Kingsport school system instead for middle and high school. The facility also could help with handling and attracting new tuition students.