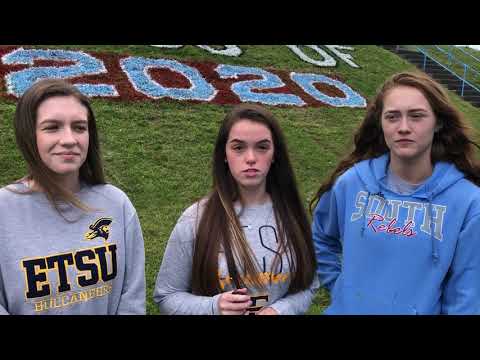 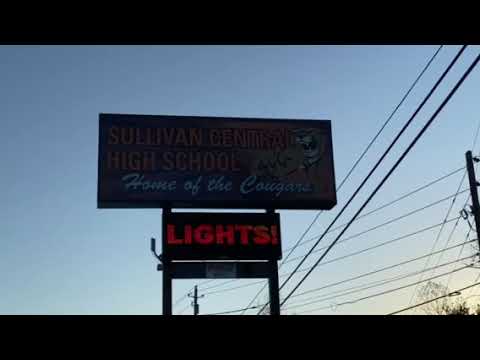 KINGSPORT— Sullivan South High School seniors, who’ve been out of physical school since mid-March because of the novel coronavirus pandemic, came back to campus Friday afternoon to get their caps and gowns, even though graduation might not be held in person this year.

However, a little something extra was waiting on the students as they drove up the lane to South. On each side of the driveway were 204 South Rebels spirit signs, each with a name of a graduating senior. The students were told to take their signs home when they returned for the Friday Night Lights, when South and sister schools Sullivan North, Central and East lit up athletic facilities to salute students as they drove through their campuses.

“That was awesome to see as you pulled in to lift the spirit,” said Ben Diamond, who is headed to East Tennessee State University in the fall to study nursing.

“It’s pretty heartbreaking,” Diamond said after having his photo taken next to his sign. “Coming into your senior year, you never thought this is how it would end.”

“I love it,” Bragg said. “It just shows they (school officials) still care about you.”

Lane, Bragg and other students said they had no idea the signs would be there. Dawn Gibson of the academic boosters said that group and the Athletic Boosters organization at South decided last week to pay to have the signs made.

With no guarantees how long the virus will continue to be a threat, virtual learning could continue for this fall’s college freshmen as well as the students who remain at South.

Lane said using Google Classroom for learning has some advantages, such as being able to do your work at your own pace and time, but he said it takes more effort. He said videos and teacher communications help.

Alexandra “Alex” Harris, McKenzie Littleton and Abigail Jayne said class work online has gone well for them. Harris and Littleton, who played basketball at South, are headed to ETSU, while Jayne is going to King University to continue volleyball if sports aren’t held hostage to the coronavirus.

Of course, “virtual” doesn’t work for sports, as Diamond knows too well. He was a member of the basketball team headed to the state tournament when those games were canceled because of the pandemic.

Diamond also is one of the student leaders who met earlier this week with Director of Schools David Cox to talk about ideas for graduation.

“He’s (Cox) trying to get as much input as he can,” Diamond said. “Everybody is going to want that to be in person or as close as you can.”

Although that option is gone for prom, Diamond said students hope to hold their own prom-like events if social distancing requirements are lifted later this year.

Ideas for graduation that students shared with the Times News included an in-person one at South in the fall, as well as a socially distanced event at a large venue such as Bristol Motor Speedway one school at a time. A survey is to go out to all Sullivan County Schools seniors next week to get their input. An online ceremony is another option.

“It’s a crazy thing. You never know what is going to happen,” Diamond said of the pandemic’s effect on academics and extracurricular activities. “I hope it doesn’t happen to seniors next year. I wouldn’t wish it on any one of them.”