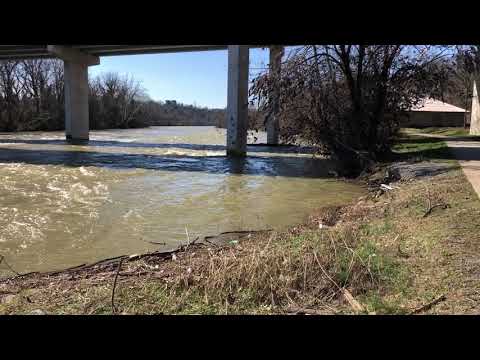 
TVA to continue drawdown of lakes this weekend

KNOXVILLE — In a reversal of the old saying that what goes up must come down, Tennessee Valley Authority officials want to remind you that as reservoirs come down, eventually downstream rivers go up.

In a watershed partly controlled by 40 dams, some rivers in the Tennessee Valley, including the Holston and others in the Tri-Cities and East Tennessee, are rising as lakes used to store excess water began to be lowered Friday. The process will continue through the weekend, TVA officials said.

“We’re getting a welcome respite from the rainfall right now,” TVA spokesman Jim Hopson told reporters during a Friday morning conference call from the TVA River Forecast Center in downtown Knoxville. “Of course it does not end when the rain falls.”

HOW DOES CURRENT SITUATION COMPARE TO LAST YEAR?

James Everett, senior manager of the River Forecast Center, told media representatives that heavy inflow and rainfall this week have averaged more than 8 inches across the valley this month, about 400% of the normal amount. He said lakes used to store some of that excess storm water — including Cherokee, Douglas, Fontana and Norris — are being lowered now that the rains have subsided. For instance, he said, Norris is up 20 feet the last could of weeks.

Although recent rainfall amounts have been much higher than normal, Everett said they have not reached the historic highs of February 2019.

“This is not a record-breaking event by any means,” Everett said. “It’s very high and it impacts a lot of people.”

He noted that TVA employees heavily staff the 40 dams across the valley during such wet times.

Dam flows can sound impressive as TVA manages water. For instance, Everett said Fort Loudon Lake releases that had been 67,000 cubic feet per second increased to 80,000 Friday. To put that in perspective, each 1.4 cubic feet of water is equivalent to 7.4 gallons.

Everett and Hopson said that any boaters on the lakes should be careful because currents and flows are not normal for this time of year and advised them to stay clear of dams that generate electricity.

Everett said TVA does not leave lakes at summer pool levels in winter because the extra capacity probably will be needed during the traditionally rainy times in the spring.

AS LOCAL LAKES GO DOWN, RIVERS GO UP

In the Tri-Cities, Everett said, South Holston and Watauga lakes have stored water that is being released because areas downstream can handle now it. On Friday afternoon, the South Fork of the Holston River near Riverfront Seafood Company and the bridge from Netherland Inn Road to Ridgefields was flowing quicker and higher than normal, even though neither a raindrop nor a rain cloud be seen.

Still, Everett said, the release of water from South Holston and Watauga, water that makes its way to Fort Patrick Henry Dam before the South Fork of the Holston joins near Rotherwood Mansion the unregulated North Fork of the Holston out of Southwest Virginia is a “very controlled release” because “the river below these dams can only hold so much water.” Everett said the plan is to “keep the rivers very full below these tributaries and dams.”

“Those lakes are very high for this time of year,” Everett said.

He said most dams in upstream areas are generating as much electricity as they can, while dams that don’t have generation capabilities — including Cherokee, Norris and Douglas — are using sluices to release water. But even the dams that do generate electricity are releasing water that is simply too much for the generators to handle. For instance, at Watauga Dam, he said, two generating units will be used, while Wilbur will open its spillways.

Storing water in local reservoirs serves to protect areas of Kingsport, Elizabethton and Bluff City that otherwise would have localized flooding. Some lakes and rivers were expected to reach their maximum levels Friday or Saturday, depending on where they are in the water flow line. In Elizabethton, the unregulated Doe River flows into Watauga Lake, which Everett said could see an increase of 6 inches in 24 hours before starting to fall. Then, he said, on Saturday Watauga would release 3,000 cubic feet of water a second.

He said Boone Lake will stay at about the same level, while South Holston, about 5 feet short of its summer pool level, will be brought down this weekend as aggressively as downstream conditions will allow.

“We will lower those levels as quickly as we can,” Everett said.

Early next week, he said, the National Weather Service is predicting from 1 to 2 inches of additional rain in the valley, rainfall Everett said is considered in TVA’s river management or regulated rivers as well as unregulated ones.