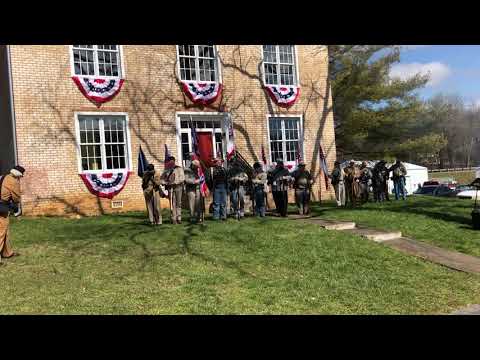 BLOUNTVILLE — Much of Blountville may have burned in a Civil War battle almost 157 years ago, but a spunky 11-year-old girl got to have the last word with a Union officer retreating after he had boasted earlier of besting “Southern chivalry” in battle.

The fifth annual Confederate Flag Day ceremony included this and other firsthand civilian accounts of the Sept. 22, 1863 Battle of Blountville, as well as a 21-gun salute by re-enactors and a chance for descendants of Confederate veterans to sign the names of those soldiers on a giant Confederate flag soon to be flown in Bristol just west of Interstate 81’s Exit 74.

Hosted by the Sullivan County Department of Archives and Tourism, the event was the first one held at the recently opened Sullivan County Heritage Tourism Information Center. It is in the renovated Sheriff’s House behind the old Sullivan County Courthouse. The building includes a first-floor display about the battle, and second-floor exhibits are beginning on various historical aspects of Blountville, which lays disputed claim to being Tennessee’s second oldest town behind Jonesborough.

The Keeling Camp No. 52, Sons of Confederate Veterans (SCV) Color Guard, presented the colors. Capt. Ric Dulaney and the 19th Tennessee Company C of the SCV, based in Sullivan County, was the honor guard. The Saturday activities on a sunny but brisk day included a speech by Ned Jilton II, a Kingsport Times News photographer, page designer and Civil War re-enactor, about civilian accounts of the battle.

The event also included remarks by the Rev. Phil Blevins of Bristol, a member of the SCV, and Billie Joe Holley of Bristol, commander of Vaughn’s Brigade of the SCV. The brigade includes eight East Tennessee camps.

NOT SO FAST, UNION OFFICER

Josephine Evan Massengill’s firsthand accounts, recalled from when she was 11, included the retreat of Union soldiers and an officer:

“We were standing on the porch, near the roadside watching them pass, when one of the Federal officers said to us: ‘We are going to give Southern chivalry hell today.’ A few hours later the Federals came back in hasty retreat and when I saw the same officer returning, I climbed on the fence and hollered to him: ‘You didn’t give Southern chivalry hell today, did you?’ ”

Massengill also recalled the burning of buildings, Union soldiers burning wood from fences to trick folks into thinking they were still encamped after they had left and Federal troops taking everything from a farm except for some apples. However, Jilton said Mrs. Walter E. Alllen reported casualties “were not great on either side,” with the Masonic lodge school and the Methodist church used as temporary hospitals where two local surgeons joined Union surgeons to treat the wounded.

Jilton, who plans to write a newspaper column based on his speech, explained that Union Gen. Ambrose Burnside in early September took his forces to Knoxville, with a plan eventually to reach Saltville and take the salt mines essential to the Confederacy. After a Sept. 18 skirmish in what is now Kingsport, Union forces under Col. John Foster reached Blountville, and the battle started shortly after noon on Sept. 23.

“Confusion grips the town,” Jilton said, as the Union forces entered and ultimately damaged the town, burning homes and other buildings, including the old courthouse that at its core still has charred remains from that day, and left a cannonball embedded in the exterior wall of what is now known as the Cannonball House. Ultimately, however, the Union troops retreated and gave Massengill the chance to speak to the Union officer in retreat. Federal troops finally reached Saltville in 1864 and won the war in 1865 when the South surrendered.

WHY HOLD CEREMONY IN BLOUNTVILLLE?

Of the five Confederate Flag Day ceremonies, three have been held in Blountville and two in downtown Bristol, Virginia, at the statue of a Confederate soldier. Until the Heritage Tourism Information Center opened, the ceremony normally was held in front of the old courthouse on a section of state Route 126 called the Great Stage Road.

During his remarks, Holley said that he fears for 21st century America because some younger people seem to be embracing “socialism, which is communism light,” and there is opposition to events such as Confederate Flag Day.

“It’s getting harder and harder to have events like this in most places,” Holley said.

Blevins said a little-known fact about the Civil War is that in the South in late 1862, an estimated 150,000 Confederate troops were saved and dedicated their lives to Christianity. He said that probably was the third- or fourth-largest of five major revivals in U.S. history.

“This is never talked about in history books,” said Blevins, a retired minister and president emeritus of Graham Bible College. “If we serve God faithfully, man will be blessed.”

He also decried abortions being allowed in the United States and lamented the “socialistic, communistic idolatry” of his native Virginia and what he called attacks on Second Amendment rights to bear arms in the commonwealth.

“I was born in Virginia, and I’m sad to see the condition of Virginia today,” Blevins said.

The celebration is held this time of year because March 4, 1861 marked when the First National Flag (Stars and Bars) was hoisted over the Confederate Capitol in Montgomery, Alabama, according to event promotions from the Sullivan County Department of Archives and Tourism.