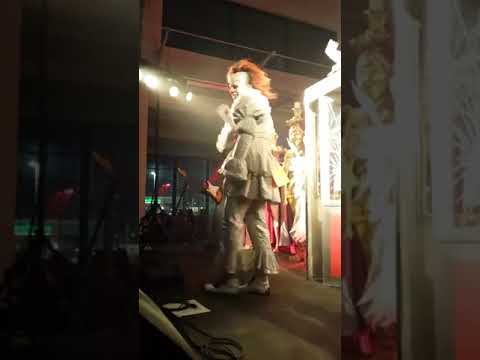 These photos are from Halloween Bash 2017, held Oct. 28 at the Kingsport Farmers Market. The event, a fundraiser for Keep Kingsport Beautiful, drew hundreds and more than 60 entrants for its costume contest, sponsored by Halloween Express. The $1,000 fist place prize went to Shea O'Neal as "Pennywise" from the recent movie "It."

A trio identified only as "Holly, Carla and Sam" on their contest registration was a close second place ($250) for their living tableau of a Pal's Sudden Service drive-thru, complete with a worker in the order window, a sign with a "No Tricks, Just Treats" message, and one member dressed in a suit and donning a Pal Barger "mask."

Patti Lawrence garnered third place ($125) for her recreation of the Tippi-Hedron-attacked-in-a-phone-booth scene from the classic Alfred Hitchclock film "The Birds."

Morgan Hill took fourth place ($75) as "Lumiere" from Disney's "Beauty and the Beast."

And "Cassie and Ricky" won fifth place ($50) for their Jimmi Hendrix and Janis Joplin impressions.

A panel of judges narrowed the original 60-plus entries down to 10 semi-finalist. Each was given a few moments onstage to again show off their costumes and personalities.

The judges then narrowed the list to the five finalists and turned the rest over to audience applause and shouts, ending with the results outlined above.

For Halloween night the Tennessee Department of Safety and Homeland Security and the Tennessee Highway Patrol offer the following safety tips for parents, children and motorists at trick-or-treaters and party-goers are likely to share the roads:

Slow down and watch for children walking on roads, medians and curbs.

Be on alert when pulling in and out of driveways.

Be especially alert for children darting out from between parked vehicles and from behind bushes and shrubs.

Do not pass other vehicles that have stopped in the roadway dropping off children.

If you are driving to a Halloween party, put your mask on after you park the car.

Adults should accompany children at all times and supervise their "trick or treat" activities.

Children must pay attention when crossing the street.

Instruct children to stay on sidewalks and to cross streets only at corners or crosswalks.

Use a flashlight and wear retro-reflective strips or patches on your clothing or costume to be more visible to motorists.

Be certain that the mask does not obstruct vision or hearing.

Ensure that costumes do not impede walking or driving ability.

"I'm asking everyone to help us not make Halloween any 'scarier' by just slowing down a little with the safety of our kids in mind," Commissioner David W. Purkey said. "Let's allow the little ones to have fun without fear of being run over by reckless drivers."

As of October 24, there have been 99 pedestrian fatalities in Tennessee. That's 17 more pedestrian deaths compared to the same time last year.

"This is a time when we see vehicle and pedestrian traffic increase," THP Colonel Tracy Trott said. "Our traffic enforcement patrols will be increased using the latest technology to conduct traffic enforcement saturations and checkpoints. Don't choose to get behind the wheel if you’ve been drinking. Always designate a sober driver. Our goal is to keep children safe, so they can enjoy their Halloween festivities."